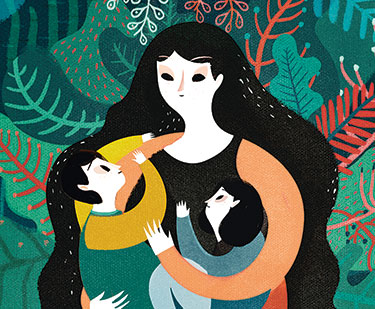 THEY ALL SAW A CAT, written and illustrated by Brendan Wenzel (Chronicle, $16.99). This is not your usual cat-themed picture book: Wenzel’s cat “walks through the world” and is seen on each page by a different animal. Since each has a different visual way of seeing the cat and a different idea of the cat’s essence, the art on each page is wildly different: The mouse sees the cat as a giant, terrifying beast with long, sharp claws. The goldfish sees the cat through the distorting fishbowl. It’s clever, great fun to look at, and has a nice read-aloud rhythm, too.

KING BABY, written and illustrated by Kate Beaton (Arthur A. Levine/Scholastic, $17.99). Beaton is a popular comics artist, and she brings a funny and ironic hipster sensibility to this book about a baby who arrives on the scene and is treated like a king. King Baby’s subjects fawn on him, serve him and fulfill his every last wish. But soon enough, an interloper arrives on the scene in the form of a baby sister. King Baby’s old tricks don’t work as well, until the two children come up with a power-sharing arrangement.

MY NAME IS JAMES MADISON HEMINGS, by Jonah Winter. Illustrated by Terry Widener. (Schwartz & Wade, $17.99.) At a time when many kids are hearing disturbing stories about the behavior of our president-elect, this gentle, emotional book is a reminder that many presidents’ biographies have distressing aspects. It’s told from the point of view of one of Thomas Jefferson’s sons with his slave Sally Hemings, an inquisitive, melancholy boy who tries to understand how his own father, one of the founders of our democracy, could treat him as a piece of property. Winter and Widener provide a simple but historically solid introduction to some of the moral crises slavery presented for our nation.

LEAVE ME ALONE!, written and illustrated by Vera Brosgol (Roaring Brook, $17.99). This book takes the old-fashioned concept behind “The Old Woman Who Lived in a Shoe” and goes rogue with it, with cool retro-modern illustrations and a loudly complaining grandma-heroine who just wants to knit in peace. By the end, of course, she realizes that without all those children around, life can get a little lonely.

THE JOURNEY, written and illustrated by Francesca Sanna (Flying Eye, $17.95). This book stops your heart by creating a fairy-tale-like aura around a pressing problem of today that we may think children cannot understand. Sanna tells the story of a young girl whose family is forced from its home because of a war. They lose their father, and must flee under dangerous circumstances to a new land they know little about. The art is lovely and sophisticated, with a hint of the darkness that her characters – like so many children we know from traditional tales – must bravely confront.

POND, written and illustrated by Jim LaMarche (Paula Wiseman/Simon & Schuster, $17.99). Three children make something great happen in this gorgeously illustrated and satisfying story. When they discover a spring bubbling from a place filled with junk, they realize a pond was once there, and they clean up, build a dam, and bring it back to life. They repair an old rowboat and use it to float on the pond in summer – in winter they ice skate, and all year long they enjoy the wildlife that comes back. It’s a wonderful reminder both that kids need to spend time in nature and that they can take the initiative when they see a fixable problem.